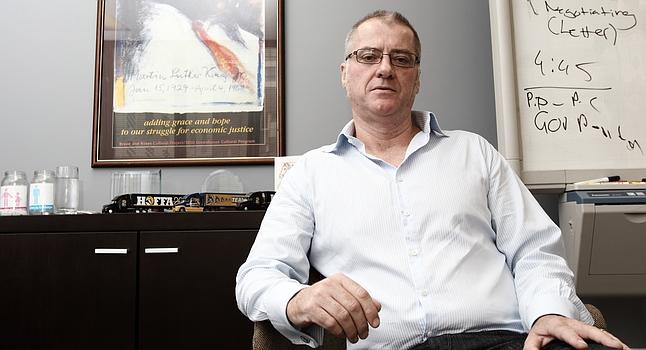 A word from TWU National Secretary

Australia has a new conservative Federal Government in Canberra, and with his feet barely under the Government table, Prime Minister Tony Abbott has already made it clear that he’s going to come after union members and our rights at work. Within minutes of the election result becoming apparent, business leaders were calling on their mates in the new Government to cut working families’ rights.

So you can bet your house on the likelihood of the new Government launching a raid on the pay and conditions of Aussie workers under the guise of improving ‘productivity’ and ‘efficiency’. The name Work Choices might be ‘dead, buried and cremated’ according to Tony Abbott’s declaration, but he’s listening to big business which will never stop trying to smash the rights of working Australians.

Like something straight out of a cheap zombie flick, the mangy remains of Work Choices have already lifted themselves out of the grave and they’re heading straight at you.

All of us will need to prepare for one hell of a battle. If anyone had any doubts about the resolve of TWU members, then those doubts have been quashed by the strength and power on show from TWU members during our negotiations with the Toll Group. Over more than six months, thousands of TWU members across the country stood together and demanded a fair agreement that secures the future of Toll jobs and locks in safety, good wages and super increases.

We stood strong when the company tried to play hard-ball and delivered a resounding 85% ‘yes’ vote for protected action, showing Toll management that TWU members were serious.

Altona Delegate Rick Millich is a member of the member-led negotiation team at Toll and said: “Management left us with no option – they effectively pushed us for a permission slip to contract out our jobs to unsafe, substandard operations. We had to show them that we’re ready to fight to secure the Toll jobs and the future for our families.”

With this ballot result in the back pocket of our member-led negotiation team, Toll management significantly improved their offer, and addressed our key concerns.

The improved deal on pay and conditions is now being considered by TWU members at Toll.

Congratulations must go to TWU VIC/TAS Branch Secretary Wayne Mader, Assistant Secretary John Berger, senior organiser Chris Fennell and their team at Toll for the hard work they have put in during the enterprise agreement negotiations, and for showing the country that transport workers are prepared to stand up and be counted.

Our Safe and Secure Skies campaign is all about protecting both standards and jobs in our aviation sector. It’s about standing up to companies like Qantas / Jetstar, which is outsourcing and off-shoring as much of its operations as it can, and cutting thousands of Aussie jobs in the process. Or fighting to secure strong agreements and better jobs at Virgin Australia, QGS or others so that all aviation workers have a better future with secure work and fair conditions.

Our Aussie Work, Aussie Rights campaign is all about making sure that we stop employers from exploiting our migration system and ripping off overseas workers. We want to stop these workers from being used as a cheaper option than Aussie workers, as well as helping make sure that our kids get the skills and training they need.

Our Safe Rates campaign is all about lifting standards in the trucking industry, and making sure all drivers are paid for every hour, every kilometre, and every cost. This campaign has been powered by Victorian and Tasmanian members and was the driving force behind the former Labor Government’s decision to establish the Road Safety Remuneration Tribunal.

TWU members spent years arguing that pressures on truck drivers were having a serious impact on road safety. We were backed up by countless studies, coronial reports and direct evidence provided by drivers – along with the sobering statistics that the workplace fatality rate for truckies is eleven times higher than the average for other industries. The Australian Logistics Council, along with other lackeys in the pockets of the major retailers, have never stopped whining about the Tribunal, because they are worried it will lead to fairer outcomes for truckies.

It’s extremely worrying however, that Tony Abbott has been parroting some of the lines of the Australian Logistics Council – publicly questioning the link between conditions in the transport industry and safety, and pledging to “urgently review” the Tribunal. This means the Tribunal could be wound back, or even scrapped altogether, before it’s even had a chance to make a difference.

It’s clear that we need to get ready for a fight. We need to show that we are strong, and that we’ll defend any attacks on our rights in Victoria, Tasmania or anywhere in the country.

Of course, this is nothing new for our Union. We’ve been fighting for our rights since the formation of the Melbourne Carriers’ Union in 1883. Like John Rowe from Altona North said, “Because me and my workmates have the strength of standing together as part of the TWU, our yards are safer, more productive and our employer treats us with respect.”

We fought and won during the Howard years and the era of Work Choices and we will continue to fight, no matter who’s in Government.

I’m up for it, and I know that TWU members are up for it as well.