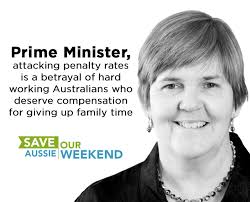 Australians want penalty rates, even if they don’t get them – survey

So popular are weekend penalty rates that a startling 76 per cent Australians who don’t get them want them to stay.

A ReachTEL poll of 3273 households conducted on Friday night found that, even among Coalition supporters, the proportion supporting penalty rates was 58 per cent. Among Labor voters it was 90 per cent and Greens voters 89 per cent.

The United Voice trade union commissioned the survey ahead of an upcoming decision from the Fair Work Commission. It has been asking clubs and other employers to pledge not to cut penalty rates even if the Commission allows them to.

Australians know that the people who work hard on weekends to make sure the rest of us can enjoy our time off don’t deserve a sudden pay cut. They are ready to support these workers to prevent that from happening.

The Greens are today scheduled to introduce a pay protection bill to ensure that workers can’t have penalty rates taken away in deals negotiated between their union and employer. The bill is aimed at the Shop, Distributive & Allied Employees Association whose deals with big employers including McDonald’s, Coles and Woolworths are believed to have cost workers $300 million a year.