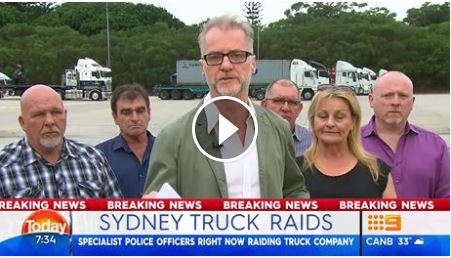 TWU National Secretary spoke this morning to the Today Show about raids currently being conducted on a Sydney transport business and the crises in the transport industry.

In the video, Mr Sheldon also discussed why the transport industry has the highest workplace deaths compared with all other industries – with 63 transport workers killed last year. He also discussed new independent Macquarie University research reporting a high proportion of truck drivers being forced to work long and dangerous hours and carrying unsafe loads to avoid losing their jobs.

The report, to be released today at a TWU road safety summit in Sydney bringing together truck drivers, industry, academics and politicians to devise ways to deal with the crisis in trucking, shows more than 10 per cent of truck drivers said they worked more than 80 hours a week.

And 82 per cent reported working more than 50 hours per week.

More than one in eight (13 per cent) said they were unable to refuse an unsafe schedule. And close to one in five of the drivers who could not refuse to work an unsafe schedule reported working 80 hours per week or more.

“I sincerely hope this research and the media reporting arising from it will be a wake-up call for the Coalition to reinstate the RSRT before more families lose loved ones as a consequence of heavy vehicle crashes. The tribunal was tasked to do what no other body has ever been asked to do: hold wealthy retailers and manufacturers to account for safety in their supply chains by breaking the link between low-cost contracts and dangerous practices,”  John said.

“We are asking how many more drivers and ordinary Australian road users will never return home before the Turnbull Government accept the mess they have returned the industry to since abolishing the RSRT and the urgency of this crisis?”

The Road Safety Remuneration Tribunal was created in 2012 after a 2008 report by the National Transport Commission found a link between pay and safety outcomes for truck drivers.

The TWU Queensland Branch lays the blame for the unparalleled safety crisis currently facing the trucking industry at people such as former rugby league player – nicknamed “the brick with eyes” – and Queensland Senator.

“Traitor to all who value safety on our roads, Senator Glenn Lazarus was a desperate politician more interested in maintaining his proximity to power by scaring people with misinformation than understanding the capacity the Road Safety Remuneration Tribunal (RSRT) had to fundamentally address the economic imbalance that had existed for so long in the transport industry.

“With transport workers 12 times more likely to die at work than any other profession, Lazarus had previously pledged to stand with Transport Workers however in an act of political desperation he switched sides and became the driving force for the removal of legislation that, at it’s core, was only ever about ensuring safe rates of pay and conditions for transport workers.

“Despite his treachery, or perhaps because of it, Lazarus received only 1% of the QLD vote falling spectacularly short of the already drastically reduced quota required in the 2016 election.

“Following the release of Electoral Disclosures yesterday identifying the source of the majority of funding for GLT, the TWU – QLD Branch is reassured by the decision made by the rank and file Branch Committee to redirect hard working members dues to campaigns committed to improving safety for transport workers.

“To this end the TWU is currently holding a 3 day safety summit in Sydney tasked with navigating the pathway to the reintroduction of a legislative safety framework to improve safety for transport workers.”