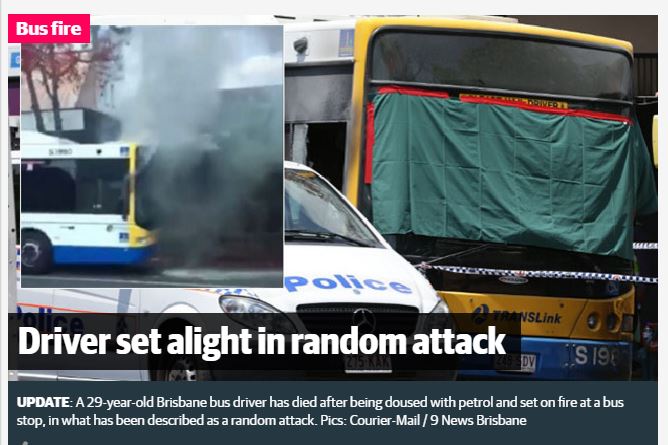 Manmeet Sharma, a 29-year-old Brisbane City Council bus driver, was killed on Friday morning after a passenger allegedly doused him with a flammable liquid and set him alight.

On behalf of the TWU (Vic/Tas Branch) and all its members I wish to say that we are deeply saddened for this young man and our sincere condolences go out to his family and friends and we also hope the 11 injured passengers a full recovery.

Burnt to death for doing your job? You just could not make this up.

However, although horrific in nature, today’s violence is just the latest attack against a bus driver in Queensland and TWU Queensland Branch members have been involved in ongoing stop-work actions in demanding more protection from violent commuters.

In late September members over 150 marched to Translink’s headquarters to deliver a petition to increase safety signed by about 10,000 commuters.

Whatever happens in Queensland will now be forever too late for Mr Sharma. Brisbane City Council Lord Mayor Graham Quirk has already announced that flags will be flown at half-mast across Brisbane tomorrow as a mark of respect for the driver.

Queensland Police Superintendent Jim Keogh said it had been a “senseless, rare and confronting act with no apparent motive, and the needless taking of a young life of a person who was supporting the community by providing public transport.”

Last week we announced our decision to ramp-up our own bus driver safety campaign and spoke of our concerns both publicly in the media and privately in meetings with the State Government. But ENOUGH IS ENOUGH AND SENSELESS, COWARDLY AND UNPROVOKED PHYSICAL ASSAULTS ON BUS DRIVERS MUST STOP.

Rising assaults on drivers can no longer be seen as an emergent situation, it is an emergency that needs to be dealt with and we will never stop fighting for the safety of our drivers.

Last week one of our own bus driver members told Channel Nine news that she believed she was going to die for nothing more than doing her job.

At 11pm on 12 October Lucy was driving the 902 orbital Chelsea to Airport West service down Main Road, Eltham, when some coward launched an unprovoked, sustained and frenzied attack on the 57-year-old as she sat defenceless behind-the-wheel.

Despite receiving blow after blow, being spat on and unable to defend herself, Lucy was able to stop the bus from ploughing into innocent pedestrians and oncoming or other traffic. A passenger was eventually able to distract the assailant for long enough for Lucy to gain control of the bus and the attacker simply walked off into the night.

Driving a Bus? Fed up with the assaults? We need to hear from you. Please take time to fill out our survey.

Since 2011 there have been 102 officially-recorded physical assaults and 33 verbal attacks on drivers piloting buses in Melbourne carrying schoolchildren, the elderly and every type of commuter in-between. Our information is that these figures may, in fact, reflect less than a third of all actual assaults during that time with most victims – for one reason or another – deciding not to make official complaints.

We are pushing for, among other things, the removal of MYKI transaction responsibilities from our members along with any onus for them to request passengers touch-on Myki and the complete roll-out of security barriers, in particular fully-enclosed protective barriers.

We congratulate those operators who are leading the way in the installation of driver security screens and barriers, but implementation and finalisation of the security barrier program needs to be accelerated and the barrier should become a mandatory requirement for obtaining a Public Transport Victoria (PTV) contract for new vehicles and funding made available to retro-fit existing fleets

At the moment Lucy is still haunted by the attack and believes she may not be able to return to the job she loves. She said she could only see this crisis in the bus industry getting worse and warned that some poor driver could soon be killed during, or as a consequence of, a physical altercation. Sadly, she has been proven correct.

Bus drivers deserve our respect and protection, if you wish to support bus driver safety and are not a TWU member, JOIN NOW – 1300 727 614.