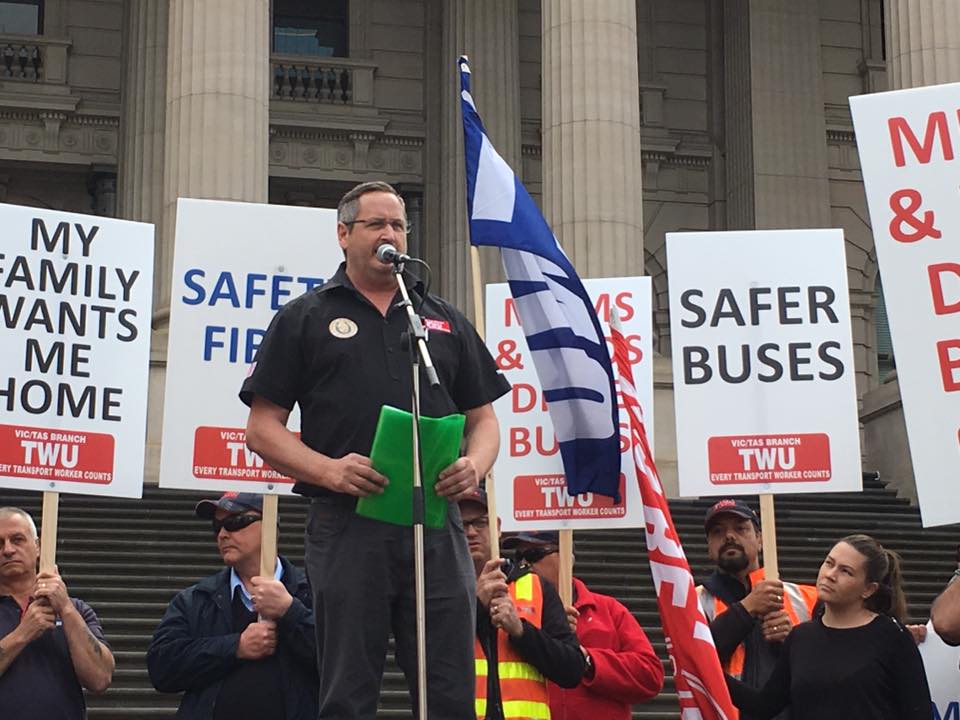 I would like to say good morning to you all, but is it?

It is deplorable that 16 physical assaults on Victorian bus drivers by aggressive passengers have already been reported this year …just a deplorable reflection on society.

One driver being assaulted is too many, I see many angry drivers here today who no doubt agree with me. Thank you for standing up and speaking out.

But there is also something shameful in a situation where honest and hard-working bus drivers are being forced to publicly protest for nothing more than the right to go to work and return home each day, safe and free from abuse and assault.

When I first started working at the Transport Workers Union 23 years ago, unprovoked and cowardly physical and verbal assaults on bus drivers were not a blip on the radar. Back then bus drivers were still valued and respected members of the community.

And this is just what has been reported.

The TWU ran a survey of bus drivers last month…EIGHT out of TEN of you said you no longer bothered reporting assaults as you believed past complaints had not been acted on appropriately.

NINE out of every TEN of you told us that the job is more dangerous today compared to when you began working because of the threats of violence. That is beyond a worrying trend.

There is no doubt the principal catalyst for the recent escalation in threatening behaviour on bus drivers has been the introduction of Myki by Public Transport Victoria.

As you know, Victorian bus drivers are employed by private bus operators contracted to Public Transport Victoria and a contractual obligation with the state forces drivers to ask passengers to touch-on Myki.

I would be surprised if any of the drivers in this place today have not felt a rising fear when having to confront these recalcitrants and ask them to pay the fare — just to keep their job.

Thieves who are sometimes high, sometimes drunk, who may have serious mental and anger issues, who may have hidden weapons, or who simply love nothing more than to resort to violence.

Tram or train drivers do not have to place themselves in harms’ way.

In fact, authorities are so live to the inherent safety risks on public transport that tram and train drivers are already in protective cabins. Have been for years.

But Public Transport Victoria have no issue asking bus drivers to potentially put themselves in harm’s way at every single bus stop.

I personally think that bus drivers serve a very important function in society. They get our children to and from school and commuters to work and back home again … all the time functioning at the peak concentration levels required to navigate what can be very dangerous roads.

Does anyone really think they need the stress of worrying that some thug is just about to spit in their face, knock them unconscious, hold a knife to their throat…….or burn them alive as they sit in the bus seat.

There is no other profession in Australia today where a random punch to the back of the head is being shrugged off as an occupational hazard.

And what really worries me is that, the more these assailants are getting away with, the more frequent and severe the assaults are getting, and the closer we are to something unthinkable.

I would have said unimaginable a few weeks ago, but the unimaginable has happened, in Brisbane on October 28.

All public transport workers across the country have been affected by the tragic death of Manmeet Alisher, cut down in his prime, and have thought ‘that could have been me’ and ‘that could be me today’.

The whole situation scares me ….but you know what also scares me?

That those in authority who can provide Victorian bus drivers with a much safer workplace in a very short period of time are refusing to do so.

The TWU have been telling them ENOUGH IS ENOUGH for some time.

So now we have come to them. We unite here today in solidarity to ask the State Government to show some leadership and for Public Transport Victoria to provide a safe workplace for these drivers.

We even have bus companies saying ENOUGH is ENOUGH.

The TWU is pushing for PTV to immediately:

COWARDLY AND UNPROVOKED PHYSICAL ASSAULTS ON BUS DRIVERS MUST STOP.

BY NOT INSTALLING BARRIERS, PTV ARE THEMSELVES BARRIERS TO SAFETY.

I say ENOUGH is ENOUGH.

We are concerned for our member’s safety and the safety of commuters. And, make no mistake about it, this workplace safety issue is an emergency.

We will not have our members or any members of the community go to work, or catch public transport, worried that they could be abused, spat on or attacked.

That is why the Rail Tram and Bus Union, who we work shoulder-to-shoulder with to improve the lives of transport workers, have joined us today along with representatives from Trades Hall and other Unions.

It’s very important also that our movement has gathered to highlight how broader social problems – around violence, anti-social behaviour, drugs, alcohol, how we care for the mentally-ill and criminal behaviour – are impacting on the transport sector.

We must make public transport a safer and more respectful place for everyone.

This is why we fight.

And we will never go away.

NEW AND IMPROVED QGS EBA ON THE TABLE
BUS DRIVER SAFETY PROTEST – STATE PARLIAMENT – Get on Board!