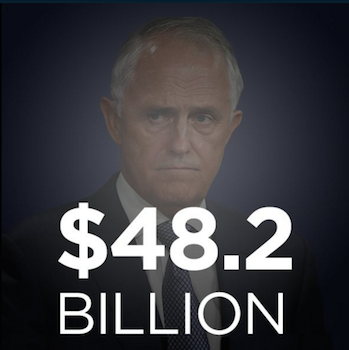 Coalition offer a not-so-taxing time for the rich

Over 40 per cent of the Coalition’s promised $48 billion company tax cut will go to the offshore investors of multinational companies and foreign tax authorities.

According to a University of Technology Sydney report, commissioned by GetUp, reducing the company tax in Australia from 30 per cent to 25 per cent would see a total tax benefit for Australia’s largest companies of $5.53 billion a year.

The report also found that two-thirds of economists have sided with Labor and believe that a better way to grow the economy would be to funnel this money into education.

The report, according to the Sydney Morning Herald, reviewed the 250 largest payers of corporate tax in 2013-14 based on publicly available Australian Taxation Office data for more than 1800 large public and private Australian firms.

The report also says that at least $2.18 billion (about 40 per cent) would flow offshore in dividends to overseas-based investors.

“Prime Minister Turnbull insists that his $48 billion tax cut will trickle down to supercharge the economy, but you don’t create jobs or boost growth by lining the pockets of foreign investors,” he said.

In announcing a $48 billion corporate tax cut as the centrepiece of their Budget and, therefore, policy agenda, the Coalition have miscalculated the growing disdain ordinary Australianshave fora system that allows large corporations to pay no, or minimal, tax every year while they struggle to pay the bills.

This bubbling anger has been missed, or ignored, by Coalition scrutineers.

“I hoped to see a high road plan for Australian businesses that would create growth, not just corporate profits but also decent jobs, better living standards and social cohesion,” he said.

“But it is the same old ‘give corporations tax cuts, reduce worker wages, get rid of protections from exploitation and the invisible hand will take care of jobs’. This low road approach is deeply disturbing.”

Accountability of our political leaders is becoming a grassroots issue for many Australians and watching one party shift even further away, ideologically-speaking,from their own core values and sense of a fair-go for all may be too much for many swinging voters.

It remains to be seen whether this will hurt the Coalition on 2 July, but it should also be noted that they have outlined no plans to close loopholes allowing big Australian and foreign companies to pay no tax.This “trust us” combination of a tax cut for big business and not reigning in fat-cat tax dodgers is asking far too much of the average voter.