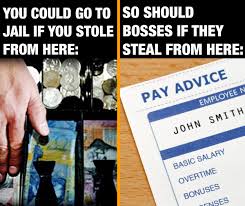 The TWU was in the FWC again this month fighting an underpayment case.

We won and a whole lot of truck drivers are happy to now be on the right hourly, penalty and weekend rates – with back payments.

There have been multiple examples of systemic wage theft that have hit the headlines in recent months.

But, far from condemning this widespread and insidious practice, the Federal Coalition will introduce legislation this week targeting unions – the only force for workers who uncover and fight exploitation.

The lives of thousands of working Australians would be much better if Prime Minister Morrison was as obsessed with attacking wage theft as he is with the unions who fight wage theft.