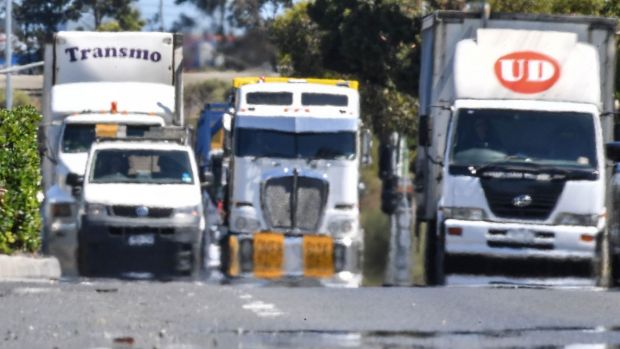 The pay structure in trucking is INCOMPATIBLE WITH SAFETY, often WILL NOT COVER COSTS FOR DRIVERS and is leading to an INCREASING NUMBER of devastating fatal and non-fatal heavy vehicle accidents, according to director of the University of NSW’s Transport and Road Safety Research Centre Professor Ann Williamson.

This includes piece-rate payments, unpaid wait times, some freight routes being remunerated at double the rates of others and part-loads causing a situation where “attention to the state of the truck and of the driver is secondary”.

The Turnbull Government tore down the Road Safety Remuneration Tribunal and is directly responsible for this formula for death on our roads. The following article was published by Fairfax Media.

So we now know the number of heavy truck crashes increased by 86 per cent in NSW over the past year; the largest increase since we started counting fatal crashes involving heavy trucks in 2009. This increase would be no surprise to anyone who pays attention to how our freight is moved around Australia. Most freight movement in Australia is by heavy truck and most of it moves along the eastern seaboard and through NSW, so this state is likely to see crashes simply due to higher exposure to heavy trucks.

Nevertheless, there are two major problems in the industry that, if not addressed, will result in further erosion of safety in the heavy trucking industry. Firstly, the whole industry is remunerated on a productivity basis. This has pervasive effects, most incompatible with safety. Some freight routes are remunerated at double the rates of others.

Trucking operators moving freight out of Melbourne to virtually anywhere else, for example, will be paid at twice the amount for the same trip in the opposite direction.

Lower-paid routes will often not cover the actual costs of the operation, including petrol, driver remuneration and so on.

The problem is even greater for part-loads. Freight rates also rarely include payment for driver/truck waiting or for loading and unloading. This also means that the majority of drivers, even those working for large trucking companies, are paid on a piece-rate basis: by the kilometre or the trip. They are not paid for waiting or loading and unloading freight. These patterns of remuneration create enormous incentives for trucking companies to keep their trucks on the road: that is the only way they get paid. Drivers have similar incentives to do longer hours at the wheel. Again, this is the only way they get paid.

The second major problem in the industry is that the permitted hours of service for long distance truck drivers are too high. Our long haul truck drivers are allowed to do longer hours of work (including driving) than any other work group in Australia, and far longer than truck drivers in virtually any other country in the world. Currently, long haul truck drivers are allowed to drive for 72 hours in a week. They can do 84 hours in a week if they have done some “fatigue training”. Drivers are required to have a break of only seven continuous hours in any 24: certainly not a long enough break for a driver to have meals, shower and obtain sufficient sleep. And this break can be in the middle of the day, when it is harder to sleep. The regulations also only require drivers to take a long break of 24 hours once in every seven days, and again, this could be a break from 3am to 3am so drivers do not get a good night of sleep. A driver can do this pattern of work and rest for months or years, never actually obtaining sufficient rest or sleep.

So the objective of the long distance road transport industry: freight forwarder, transport operator and driver, is to keep freight moving. Attention to the state of the truck and of the driver is secondary.

No-one gets paid unless the wheels are moving so anything that keeps trucks off the road, including maintenance, or that keeps drivers away from the wheel, including fatigue, will be overlooked.

Add to this the most demanding hours of work for drivers in the world and we have insufficient checks and balances to ensure our long distance road transport system is safe. This is a formula for death on our roads.

The introduction of the National Heavy Vehicle Regulator about five years ago has done little to improve safety in the heavy trucking sector. They simply administer inadequate law. It is up to road authorities and government to ensure that the context in which the road transport system operates and especially the regulations that govern it are consistent with safe practice. This is clearly not the case in this industry. It is time for an independent review of the long distance road transport industry in order to establish a better path towards a safer industry that will ensure that all truck drivers get home to see their families.

Professor Ann Williamson is the director, Transport and Road Safety Research Centre at University of NSW’s School of Aviation.