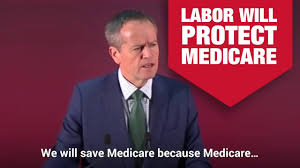 Medicare can only be saved by voting Labor

The voting public has been warned not to fall for Coalition ‘spin’ that they have no plans to sell-off Medicare.

“Now that he has been caught out, Mr Turnbull has been blustering and denying everything and he is clearly very worried.”

Ms King said if Mr Turnbull had no plans to sell Medicare why:

“This all comes on top of cuts to our hospitals, a GP tax-by-stealth and making people pay for vital medical tests. The facts are on our side but Mr Turnbull’s supporters are in overdrive, covering for him and accusing Labor of a scare campaign. But if the Coalition get away with saying this is all a ‘scare campaign’we will lose more than the election – we will lose Medicare itself,” Ms King said.

It should be remembered that in 2004 the Coalition promised they were not going to make drastic changes to industrial relations laws and that Work Choices was not a 2004 Liberal party election policy. However, following the 2004 federal election, the Liberal–Nationalcoalitionheld a majority in both houses of parliament, and amendments were introduced into the House of Representatives on 2 November 2005. Remember WorkChoices.