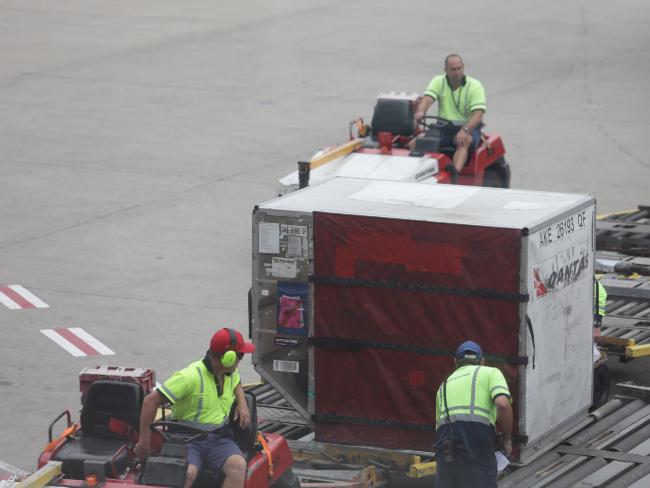 As temperatures soar and most Victorians and Tasmanians are locking down in air-conditioned comfort, spare a thought for our baggage handlers. Without these transport workers moving the bags in nearly 40C, the planes dont fly.

ON a hot day the heat creeps up through Darren McIntosh’s boots and hangs thickly in the belly of the aircraft he and his crew climb into to load and unload the luggage of holiday-makers and travellers.

Some of the larger aircraft have luggage stacked in containers and loaded mechanically, but the Boeing 737 and other “smaller” jets still rely on manpower to do the job.

“After three or four days of temperatures up around 30 to 35 degrees it’s been known to be 60 degrees on the tarmac,” he said. “You feel it radiate and you also get it through your feet.”

When temperature reaches 30C a “water boy” ferries ice water and cordial to the various crews working on the tarmac below the giant aircraft.

And a rotation policy comes into effect with each crew member only inside the cargo hold to stack 30 bags before jumping out and allowing another crew member to take over.

Five ways young workers get RIPPED OFF over summer
ATTENTION: TULLAMARINE FWY TO CLOSE BOTH DIRECTIONS FOR 60 HOURS