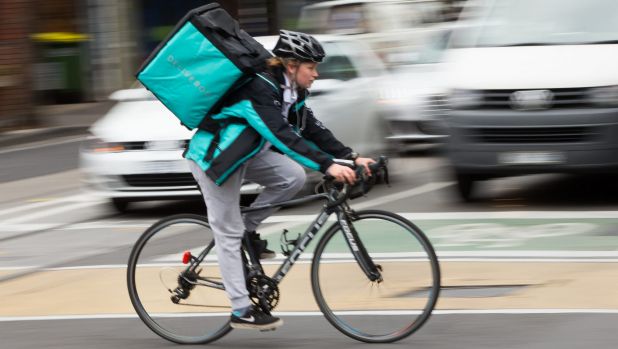 The TWU is concerned about reports in Fairfax Media that Coles has teamed up with the bicycle-based service Deliveroo to offer 30-minute home deliveries on groceries.

Deliveroo, which mostly delivers food from restaurants, has been offering “food packs” such as a selection of barbecue items or entertainment snacks for delivery to customers in Melbourne’s inner-east since early this year.

According to the Fairfax report, “Coles has started promoting the offer to customers, advertising home delivery within 30 minute on those products through Deliveroo’s network, which is made up of contractors mostly using bicycles or scooters.”

“A Deliveroo spokeswoman said the service was only available to customers living within about three kilometres of Coles’ Richmond online-only “dark store”, but that ‘based on the success of the partnership, we’re wanting to roll it out further’.”

What’s the price for our convenience?

Riders at Deliveroo don’t get minimum wages, penalty rates and basic entitlements – 30 minute deliveries are a recipe for disaster.

Check out this 2016 Fairfax article, under the headline Deliveroo and foodora accused of using sham contracts for bicycle delivery riders.

“Two “disruptive” food delivery companies worth hundreds of millions of dollars have been accused of putting bicycle delivery workers on sham contracts to avoid paying them properly.

Riders are earning as little as $10 an hour to collect food and deliver it to Deliveroo customers and $14 an hour plus a small delivery fee to work for foodora.

The businesses let customers order food from restaurants online and then deliver the order through their networks of bicycle couriers, with the nearest available rider being notified via a smartphone application.

Hundreds of cyclists have signed up to work for Deliveroo, a British company recently valued at $715 million, and foodora, whose German parent company Delivery Hero claims to be worth more than $4 billion.

While riders wear the company’s uniforms and use their food boxes, Fairfax Media can reveal they are not being paid the minimum wage, penalty rates or superannuation and are not cover by WorkCover.

Instead, they have been told to get ABNs and are paid as independent contractors.

A Deliveroo spokeswoman said it paid its “freelance” riders $16 an hour plus $2.50 per delivery and confirmed it did not pay other entitlements.

“It’s all right if it’s busy, but you never know how many deliveries you are going to get,” the rider, who asked to not be identified for fear of losing the job, said.

foodora meanwhile said new riders were paid $14 an hour and $4 per delivery, which increased by $1 once they passed a trial period.

The company would not say if it paid weekend penalty rates, only that it paid a “surcharge” during busy periods, but riders for the company said they did not get paid extra to work on the weekend.

A spokesman for the Fair Work Ombudsman said the riders should fall under the Road Transport and Distribution award, under which a casual is paid $22.88 per hour, plus time and a half on Saturday and double time on Sunday.

The ombudsman is already working with one Deliveroo rider to resolve a dispute, the spokesman said.

The vast majority of riders are backpackers on working holiday visas or international students, according those who spoke to Fairfax Media.

One foodora rider said he enjoyed the job, but was concerned about public liability and admitted to not knowing his tax obligations.

“It’s easy to look past the sketchiness,” he said.

Another rider who said he earned about $19 an hour while working full-time hours for Deliveroo echoed those concerns.

“Knowing the risks and the cost of running the bike, I wouldn’t do it for any less [money],” he said.

Another backpacker said the job was far better than working in hospitality, where exploitation and underpayment was rampant.

‘They’re not in business’

Prominent employment lawyer Josh Bornstein, principal at Maurice Blackburn, examined work contracts from the two companies obtained by Fairfax Media and said they were a “farce” designed to reduce risk and costs.

“They looked to me like they were a sham,” Mr Bornstein said.

“My fundamental concern in this situation is whether the workers are entrepreneurs. That is, in business themselves – that’s what an independent contractor is.

A landmark High Court decision in 2001 found a Sydney bicycle courier who knocked down a pedestrian was an employee of the courier company, not an independent contractor, in part because he wore the company’s uniform, was not providing skilled labour, and could not bargain with the company over remuneration.

Transport Workers Union national secretary Tony Sheldon said that case was the reason his union pushed to include bicycle couriers under the Road Transport award.

“It is very concerning that bicycle couriers are still being forced to operate as independent contractors so they can be paid below the award rates and denied their basic benefits,” Mr Sheldon said.

‘They work for restaurants – not us’

A Deliveroo spokeswoman said it was not engaged in sham contracting and that most drivers were “working with us around other commitments such as studying and running a small business.”

“Riders enjoy the flexibility of freelance work, which would not be possible were they to be classified as employees,” she said, adding that riders were able to work for multiple companies and could choose when to accept shifts and delivery jobs.

“To do this they must be independent contractors,” she said.

foodora Australia chief executive Toon Gyssels cited flexible hours and the fact riders used their own bicycles as reasons why they were not employees.

“They work for 750 restaurants which dispatch the jobs to them,” Mr Gyssels said.

Deliveroo said that its riders were responsible for their own insurance, while foodora said riders were required by their contracts to have personal and third-party insurance. Mr Gyssels said foodora had also taken out private insurance for its riders.

They both charge customers a $5 delivery fee and take a 30 per cent cut of the restaurant’s bill, according to hospitality industry sources who have dealt with them.