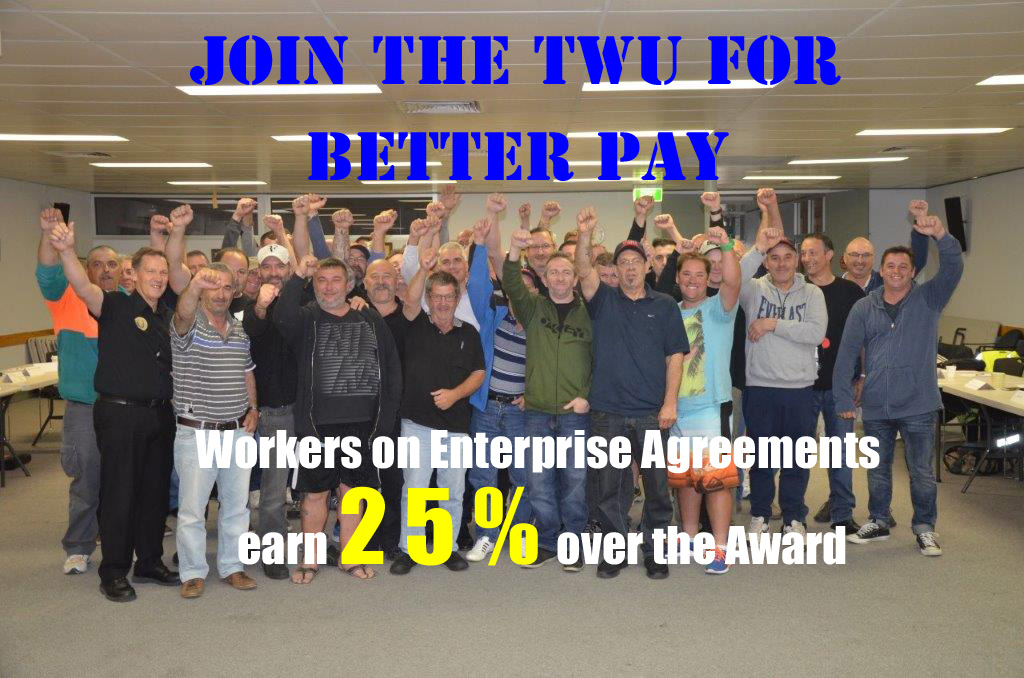 Workers on enterprise agreements are paid 25% more than workers on awards or the minimum wage, according to ACTU analysis of newly-released Australian Bureau of Statistics data.

TWU (Vic/Tas Branch) Acting Secretary Chris Fennell said the statistics strongly confirmed that the hard work undertaken by Union organisers and delegates on behalf of members was, literally, paying off for these working Australians.

“These figures confirm the vital work that Unions perform for members and their families and the message is loud and clear, if you want better pay and conditions and safer workplaces – join a Union,” Chris said.
“The Branch is scheduled to begin negotiations on 50 EBA’s – covering over half the membership – this year. We are stronger together and now is the time to join the TWU or to encourage workmates to join the Union because, historically, there is no doubt that those yards with higher membership percentages usually secure better enterprise outcomes.”

The number of Australian workers who are on either the minimum wage or awards has increased from 1.9 million at May 2014 to 2.3 million at May 2016, while there are 3.8 million workers on enterprise agreements.
ACTU President Ged Kearney said Australian Unions are committed as ever to ensuring award wages are lifted and the number of workers on enterprise agreements increases.
She said the data was also “truly appalling” in confirming that there is a reason why the Turnbull Government and big corporations want to transfer workers onto awards – they are paid far less.

“This Government’s campaign to stop unions helping workers get decent pay and to access their legal rights is morally bankrupt,” Ged said.
“Prime Minister Malcolm Turnbull’s government has done nothing to actively stop businesses tearing up enterprise agreements and putting workers back on award wages.”
“This week we have seen dairy company Parmalat threaten to tear up an enterprise agreement if workers didn’t take a pay cut, one of many unscrupulous examples of how corporate Australia is ripping workers off by attempting to use loopholes in the Fair Work Act.”