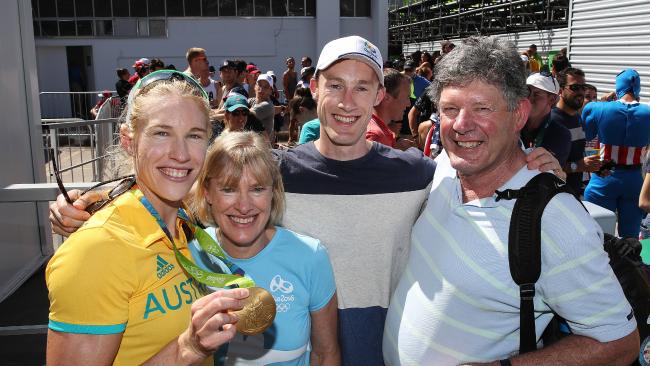 Something to Crow about

Kim Brennan was watched by millions of people worldwide when she rowed her way to a gold medal in the single sculls at the recent Rio Olympic Games.

The proudest of all those observers was, no doubt, big Max Crow.

Max travelled to Rio and was beside Lagoa Lagoon for the race with his wife Sue and son Justin, a strength and conditioning coach with the Bombers.

Having watched his daughter train privately for a decade before that very public event on August 14 Max, who joined the TWU in June 1979 and was a member for 34 years, reckoned Kim worked a great deal harder than most AFL players. “She’d do more in a day than they’d do in a month. She’s incredible I reckon. She’d be up at 5 in the morning and still be working at 8 o’clock at night — and have every minute of that day organised,” he said. “On the exercise bike at home she trains to exhaustion twice a day and she’d fall off the bike, she was that exhausted.
“She’s been doing that for years. It’s either the rowing machine or bike … and it’s just amazing the dedication she’s got.”

Max – who mainly worked for Regal Cream Products in Derrimut – said that being a hard worker helped Kim successfully switch from athletics to rowing after a leg injury
ended a hurdling career during which she finished second to fellow Olympian Jana Pittman.

Kim previously rowed at the 2008 Beijing Olympics without earning a medal but brought home a silver and a bronze medal from the 2012 London Games.