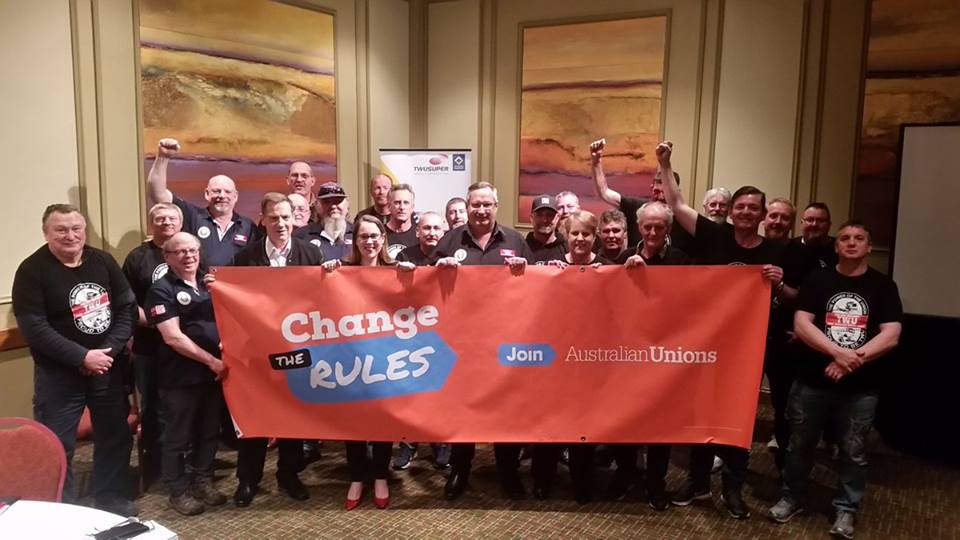 Tassie Delegates Training In The News

Great story in the Examiner newspaper profiling our Delegates Training in Launceston this week!!!

TWU of Victoria and Tasmania derides state of Tasmanian roads

Workplace safety, the quality of the state’s roads and the number of truck stops are the three biggest concerns for Tasmanian transport workers, according to the sector’s union.

The Transport Workers Union of Victoria and Tasmania held a delegates meeting and training course in Launceston on Tuesday, in part to discuss some of the challenges facing the industry.

Union branch secretary John Berger said a cross-sector committee should be formed to deal with some of these issues within the next few years.

“A lot of drivers are saying the quality of the roads just aren’t up to scratch, and when repair jobs are done they don’t put in the proper foundations,” he said.

“The Midland Highway, for instance, as the key highway between Hobart and Launceston is sub-standard.”

Infrastructure Minister Jeremy Rockliff said he was unaware of the concerns, as the TWU had not contacted the state government.

“When the $500 million Midland Highway Action Plan is complete, the length of the highway will meet the minimum three-star rating set out by the Australian Road Assessment Program,” Mr Rockliff said.

Another key issue discussed at the meeting was the amount of available truck stops on Tasmanian roads and how that affects the safety of drivers.

Unions Tasmania secretary Jessica Munday said the industry was the most dangerous in the state.

“Thirty-six per cent of work-related deaths in Tasmania in the last three years, 2015 – 2017, were in the transport industry,” she said.

Only two truck stops are established between Launceston and Hobart, according to Mr Berger.

He said this was a hazard for drivers.

Mr Rockliff did not address these concerns when asked for comment on the issue.

“There’s just not enough places for drivers to safely pull over and check their load or stop for a rest,” Mr Berger said.

“Even if it’s just somewhere for the drivers to stop to go to the toilet, there’s just not enough places.”

Mr Berger said many Tasmanian transport companies will enter into negotiations for a new enterprise agreement, with their employees, in 2020.

However, the branch secretary said Australia’s system of enterprise bargaining – agreements brokered with individual companies and based on productivity gains – was no longer suitable for the transport sector.

“Enterprise bargaining is past its use-by date for transport – we can’t carry bigger loads or drive faster to improve our productivity,” he said.  “We need an all-industry agreement instead.”