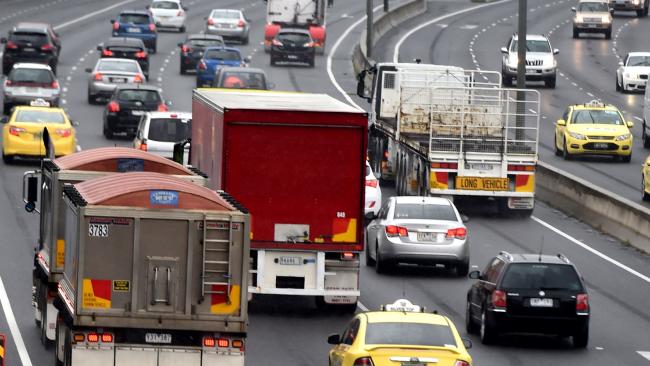 TWU organiser Luke McCrone said the protests were organised by drivers after a satisfactory agreement in regards to set payment rates and other conditions could not be reached with the State Government.

The $1.3billion project will widen CityLink from the West Gate Freeway to Melbourne Airport on the Tullamarine Freeway to increase capacity and improve traffic flow.

Wednesday’s protest was principally held by 30 drivers in tip-trucks driving, legally and safely, side-by-side during peak hour in the 80km/h zone outbound on the Tullamarine Freeway between the Bulla and Moreland Road exits.

TWU member and tip-truck driver Rob Norris said the protests would continue until the government listened to their concerns.

The TWU is calling on all parties to seek the assistance of the Road Safety Renumeration Tribunal  (RSRT), a Federal Government agency responsible for determining a rate of pay which enables drivers to safely run their trucks and who can only intervene with the agreement of all the parties.

Mr Norris said the unacceptable downward pressure on rates caused by the new deal would see drivers unable to maintain and service trucks, struggle to re-fuel, update tyres, cover breakdowns, feed the family and pay themselves a wage.

According to The Age, CityLink owner Transurban will reap more than $3 billion in extra toll revenue from the widening of CityLink and the Tullamarine Freeway.

Works began on 5 October last year with a section from Bulla Road to Power Street currently under construction and the Melbourne Airport to Bulla Road link to begin this year.

Construction tippers, also known as mud carters, work in one of the most competitive and volatile sections of the transport industry.

It is critical to the success of any TWU attempt at bench-marking conditions that carters stand unified against any harassment, intimidation and discrimination.