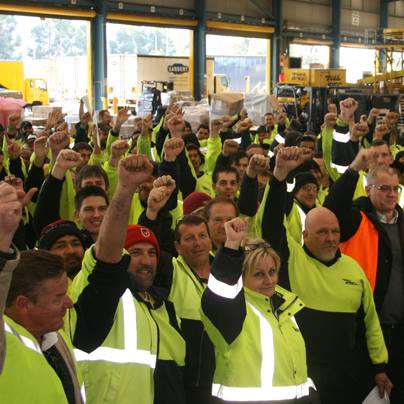 The Transport Workers’ Union (TWU) has launched Federal Court proceedings against the Toll Group after more than 170 Toll workers were denied the right to vote in a recent ballot on protected action. The protected action ballot was supported by 85% of votes cast in results announced earlier this week, but hundreds of workers were disenfranchised after the electoral list supplied by the company to the Australian Electoral Commission (AEC) was not complete, up-to-date or accurate.

TWU National Secretary Tony Sheldon said, “Workers at the Toll Group have been in negotiations for a new agreement at Australia’s largest transport and logistics company since early April. Management’s refusal to offer a fair deal on key issues like job security, safety and superannuation resulted in our member-led negotiation committee calling for a ballot on protected action.

“It quickly became clear that hundreds of workers were deemed ineligible to vote, because they had been left off the list of eligible workers that Toll supplied to the AEC. Many of these workers have been with Toll for decades and voted on previous agreements. This has just made us more angry about the way Toll has disrespected its workers through the whole Enterprise Agreement process.”

TWU Member Anita Mason, works at radio control at Toll in Moorebank, Western Sydney, was one of more than 30, overwhelmingly female radio control operators at the site left off the ballot rolls supplied by Toll.

“I care about my work, and I want to have a say in this ballot,” Ms Mason said. “It just seems like the company is not taking this process seriously. Just because I’m not driving a truck, my work is still really important to what happens in our yard every day and I should have had the chance to have my vote counted.”

Tony Sheldon said a flaw in the Fair Work Act meant that unions could not ascertain if workers had been left off the roll for workplace ballots until after the ballot had started.

“Quite frankly, there is no good reason for these workers to be excluded from this ballot.

“We are concerned that the exclusion of these workers was not just an administrative oversight and that’s why we have lodged federal proceedings on this matter.

“This could be the thin of edge of the wedge, with employers exploiting a loophole in the Fair Work Act to deny workers the right to vote on their rights at work.

“It’s always been our intention to reach an agreement with the company that all of our members can vote on, but this kind of behaviour and deliberate disenfranchisement only makes that more difficult,” concluded Tony Sheldon.