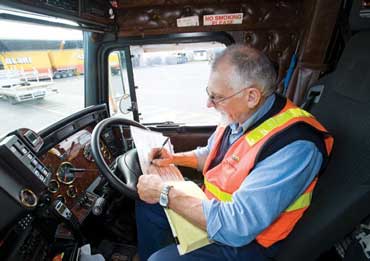 A former employee whistleblower against a trucking company that faced dozens of fatigue management charges is suing the company for almost $690,000 in damages.

ANY TWU MEMBER, OR ANY DRIVER IN GENERAL, WHO ARE BEING ASKED TO DO THE WRONG THING, INCLUDING BREAK FATIGUE LAWS, BY EMPLOYERS, SHOULD CONTACT THE UNION IMMEDIATELY.   BREACHES OF ROAD SAFETY RULES AND LAWS, INCLUDING IN THIS ALLEGED SITUATION, PLACE THE LIVES OF DRIVERS AND ALL OTHER ROAD USERS AT RISK.

Company boss Les Blennerhassett and 45 drivers were charged, with the drivers collectively fined about $65,000.

The 43 charges against Mr Blennerhassett were dropped in a Townsville court last year, but this has been appealed by the Department of Transport and Main Roads.

Mr Gleeson was sacked by the company in 2012, but later received compensation after being represented by the TWU for unfair dismissal.

He has now filed for damages against Blenner’s Transport in the Cairns District Court, claiming he suffered injuries, including depression and bowel problems due to the “breach of contract and negligence” of the company.

Along with medical expenses, he is seeking compensation for loss of past and future income, interest and superannuation.

In court documents obtained by the Cairns Post Mr Gleeson alleged Mr Blennerhassett directed drivers to keep driving and breach the fatigue management regulations which allowed for 14 hours of driving within 24 hours.

Mr Gleeson alleges his injuries, which include major depression and inflammatory bowel disease “were caused or contributed to by the defendant’s negligence and breach of contract”.