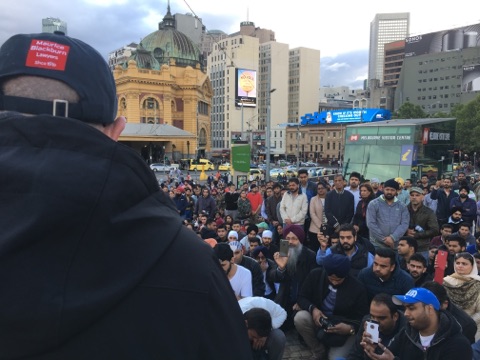 The TWU have made much progress over many years driving up safety conditions across the bus industry, but while drivers are open to attack there is still work to be done. TWU members are strong and stick together and, as our ongoing campaign for bus driver safety intensifies, we again stick together in demanding the highest industry standards of safety for our members and the people they transport.

Mike told those gathered at Federation Square on November 1 that it was incredible to see the support among the local community who had gathered to pay homage to the 29-year-old Brisbane City Council bus driver who died last Friday after a passenger allegedly doused him with a flammable liquid and set him alight.

“This man had his life taken away whilst performing his job as a bus driver,” Mike said.

“Each working person in Australia has the right to go home at the end of the working day. Public transport Unions will continue to campaign for better security for public transport drivers.

“The TWU represents bus drivers in Victoria and we know that our members offer their support and condolences to the family of Manmeet , his friends and fellow drivers.”

In a show of solidarity and support for Manmeet , TWU (Vic/Tas Branch) bus driver members will work today with headlights on.  CDC have also encouraged all drivers to wear black armbands on their left arm on Wednesday. A special fund has been created to assist Manmeet’s family. 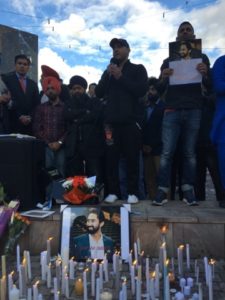 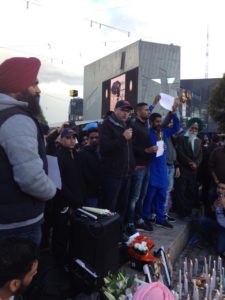 TWU (Vic/Tas Branch) Senior Bus Organiser Mike McNess tells those gathered for Manmeet Alisher that each working person in Australia has the right to go home at the end of the working day.

This was an horrific example of the ongoing assaults on bus drivers. Last week we announced our decision to ramp-up our own bus driver safety campaign and spoke of our concerns both publicly in the media and privately in meetings with the State Government. But ENOUGH IS ENOUGH AND SENSELESS, COWARDLY AND UNPROVOKED PHYSICAL ASSAULTS ON BUS DRIVERS MUST STOP.

Manmeet’s alleged killer has been arrested and charged with one count of murder and 11 counts of attempted murder.