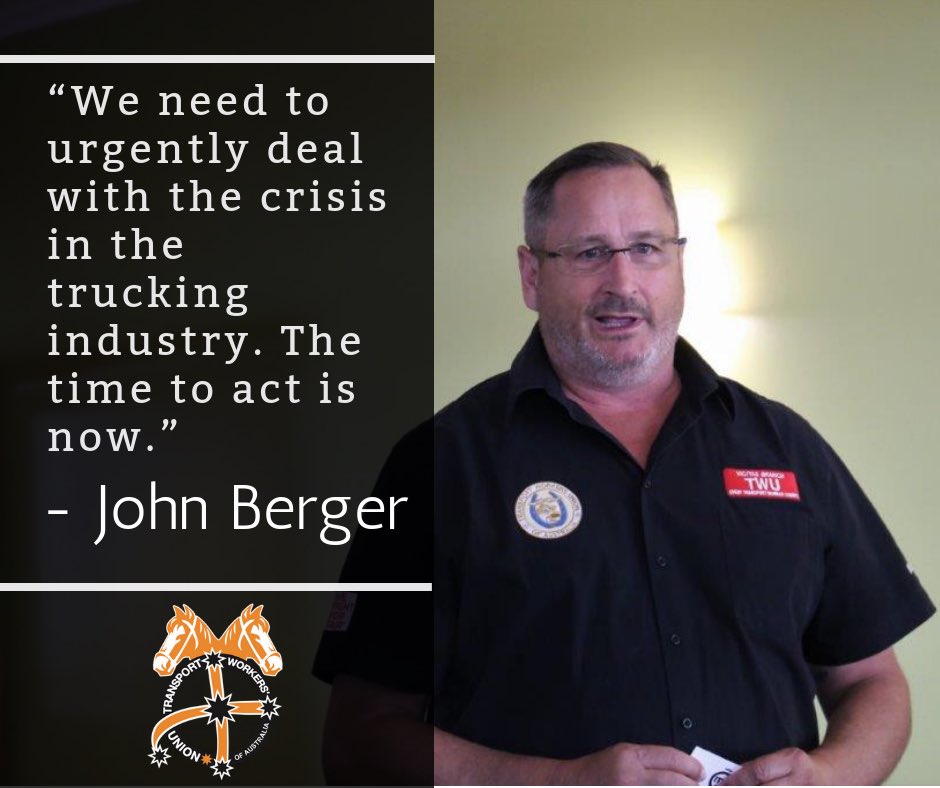 Truck drivers, families of truck crash victims, transport companies & associations, and major retailers gathered in Canberra today to discuss a legislative framework to the crisis in trucking as the death toll reaches 500 since the Federal Government tore down a safety watchdog.

The parties will meet at a Safe Rates summit in Canberra to call for tough regulation to put in place a system to investigate risks to safety in trucking that result when truck drivers and transport companies are put under financial pressure.

“We want to ensure truck drivers are not forced to drive long hours and speed, risking their lives and the lives of others. We want to ensure transport companies aren’t forced to delay maintenance on their trucks or forced out of business because their contracts are being cut in price. We want to make the roads safer and to reduce the disproportionately high number of trucks involved in road deaths. We can do this by regulating the transport supply chain, making it safer and fairer,” TWU National Secretary Michael Kaine.

“The Federal Government has blood on its hands and it needs to come clean and admit it got it wrong. Since it tore down a road safety watchdog that was investigating risks to safety, 500 people have lost their lives in truck crashes. Thousands of people have lost their jobs after over 1,000 trucking companies have gone bankrupt during that period. The Government knew its actions would result in this level of destruction: its own report shows the road safety watchdog was cutting truck crashes deaths by 28%*,” Kaine added.

Since the watchdog was torn down in April 2016: Statistics show 1,026 businesses in transport, warehousing and postal have become insolvent, according to the Australian Securities and Investments Commission (ASIC). A Department of Infrastructure report has said: “Heavy trucks are disproportionately involved in casualty crashes: approximately 16 per cent of road crash fatalities and 4 per cent of injuries involve these vehicles.”

A Macquarie University study has criticised a “critical gap” in regulation and shown that:

A series of studies by Monash University has shown that:

A Senate Committee report has recommended that: “The committee recommends that the Australian Government convene a series of industry-led roundtables to make recommendations to government to establish an independent industry body which has the power to formulate, implement and enforce supply chain standards and accountability as well as sustainable, safe rates for the transport industry.” The summit will also examine the problems in the on-demand economy, with rideshare drivers and food delivery riders being placed under pressure because of low pay and poor conditions. An Uber driver was recently convicted over the death of a passenger in Sydney, after the court heard the driver had worked for much of the previous 21 hours.