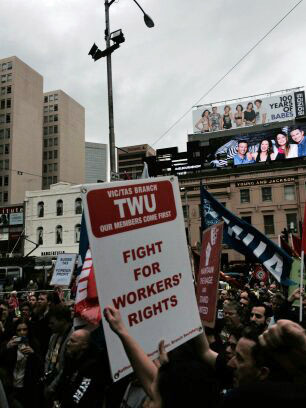 The strength of the TWU (Vic/Tas Branch) has been proven once again after all three motions it put to last weekend’s ALP State Conference were passed by Victoria’s Labor Party.

(1) Called for a change to law to ensure employers face jail if they engage in wage theft from their workforce.

(2) Called for the State Government to develop a mandatory, comprehensive, industry-based rates and costs schedule under the Owner Drivers and Forestry Contractors Act for application to the tip truck industry and for significant penalties for breaches of this schedule to be introduced.

(3) Called for state and federal Labor to support the overhaul of the Fair Work Act to close loopholes that currently allow for the exploitation of airline ground handling workers and to provide proper protection for workers in this and other industries.

1 – Wage Theft  (click the link to read our motion) – as presented by Branch Secretary John Berger. 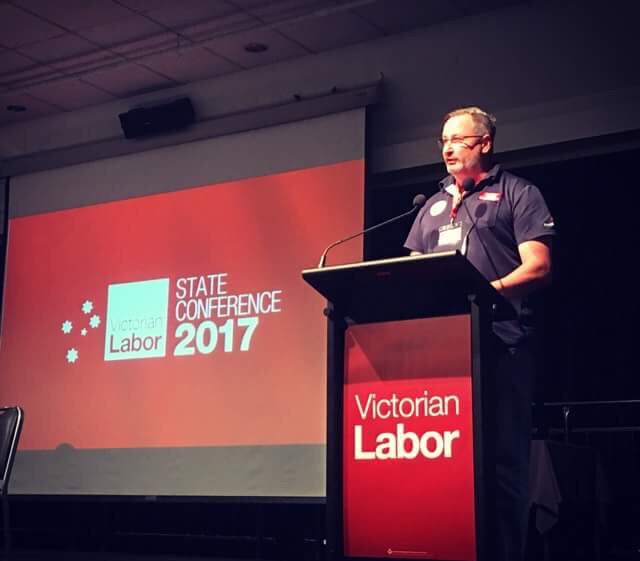 The wage theft resolution called for a “clearer and tougher deterrent to employers stealing from the pay-checks of their staff, through wage underpayment and superannuation non-payment”. The move at the Victorian Labor State Conference follows exposés of companies which have chronically underpaid their employees.

“Available remedies for those caught underpaying are currently confined to voluntary payments, mediation, and letters of caution, court orders and fines. This system encourages unscrupulous employers to see what they can get away with and is not keeping with the expectations of modern Australia,” said John.

7-Eleven has so far paid out $90 million for non-payment of wages while Caltex has set up a $20 million fund to repay their workers. Dominos has said is has returned $4.5 million to its workers that it underpaid.

A 2008 report by Australia’s National Transport Commission found evidence ‘linking payment levels and systems to crashes, speeding, driving while fatigued and drug use.

There is also a problem with non-payment of superannuation. A report by Industry Super Australia shows in 2013-2014 employers failed to pay $5.6 billion in super payments. The report shows transport was identified as one of the worst industries for non-payment of super.

2 – Owner Drivers  (click the link to read our motion) – as presented by Branch Secretary John Berger.

WE all know that poorly paid labour, the world over, is inefficient labour. Or is it?

The reason is this cut-throat industry overwhelmingly operates on a pay-by-the-load system that is often under parity. It forces adverse conditions on drivers, such as significant unpaid waiting times, and therefore provides incentives for drivers to adopt unsafe practices.

Safe Work Australia figures show that, of the 51 workplace deaths so far recorded this year, 19 were transport workers and the vast majority were truck drivers.

The State Conference acknowledges the Victorian Government’s Inquiry into the Labour Hire Industry and Insecure Work and its Final Report which has made 35 Recommendations.

We urge the State Government to develop a mandatory, comprehensive, industry-based rates and costs schedule under the Owner Drivers and Forestry Contractors Act for application to the tip truck industry and for significant penalties for breaches of this Schedule to be introduced.

Unfortunately, flagship State Government infrastructure projects, such as the level-crossing removal project, are also operating on the pay-by-the-load system. Removing this archaic system will make the roads safer overnight and, therefore, can be seen as a road safety measure. The Government must act now to alleviate the pressure heaped on the drivers at the bottom of the chain.

No employee who spends 80 hours a week in an Australian workplace should be impoverished. But this is the case for many workers at airline ground-handling service providers Aerocare and Dnata.

The companies are an example of all that is wrong with an Australian aviation industry currently hell bent on entrenching insecure work and under-employment and gaming the IR system by avoiding obligations under collective agreements.

The TWU and ASU are in the process of challenging the approval of the latest Aerocare EBA because it falls below the Award standard for a range of conditions.

Dnata have created a subsidiary company and are seeking to sneak through sub-standard collective agreements voted on by just 2 employees, in concert with a labour hire provider. This subsidiary will bid for work using this lower wage cost structure.

The status quo has already allowed for corporate restructuring to be used to drop employment standards and other companies will have no choice but to also circumvent laws designed to protect workers, such as transfer of business laws, to remain competitive.

We call on state and federal Labor to support the overhaul of the Fair Work Act to close these loopholes and provide proper protection for workers and, ultimately, for all airline passengers.