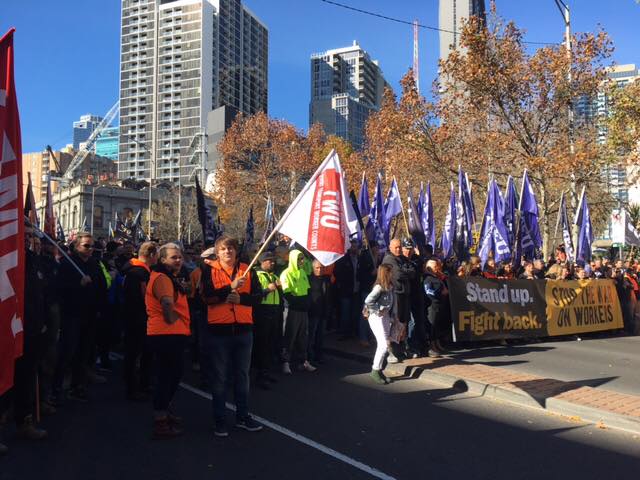 TWU members proudly marched with over 20,000 of our union comrades through Melbourne yesterday to protest against the Coalition’s war on workers.

TWU (Vic/Tas Branch) Secretary John Berger said the huge attendance reflected growing concerns not only within the union movement, but the entire Australian working classes, regarding the direction the Turnbull Government was taking the country.

The CFMEU-led mass rallies were held nationwide to highlight its fears at the revival of the Australian Building and Construction Commission (ABCC), which will have the effect of cutting wages and compromising safety in the sector. A new building code, administered by the ABCC, outlaws clauses in workplace agreements such as union consultation powers and restrictions on labour hire use.

Protesters also assembled to condemn imminent cuts to weekend penalty rates for retail and hospitality staff, due to take effect from 1 July.

John said it was only a matter of time before the cuts would spread into other sectors, including transport.

“If feet on the street are any indication, the Turnbull Government may just have scored one of the most-telling own goals in Australian political history by refusing to stop the axing of penalty rates for the lowest paid workers in society,” John said.

“Then there is the record unemployment, lowest wage growth on record and the fact that the Turnbull Government’s only economic plan is a $65 billion tax giveaway to big business. This government has made the fatal error of revealing that it has no idea what it is doing.

“We will not stand idle while the Coalition reduces workers pay packets and allows them to be treated unfairly and exposes them to dangerous workplace conditions.” 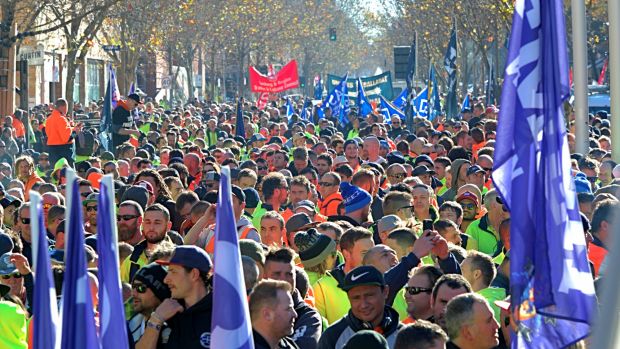