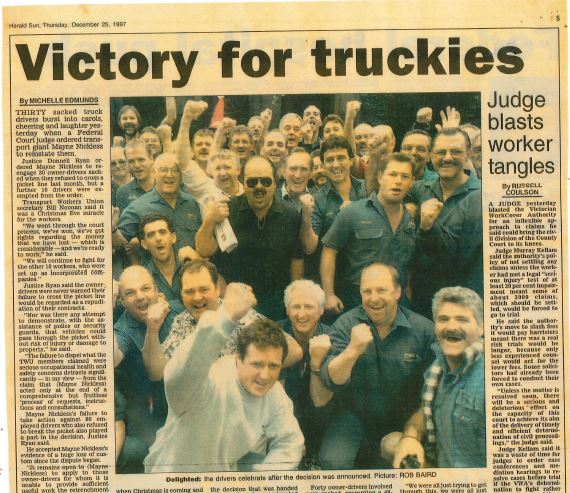 YOU LITTLE RIPPER: How The Herald-Sun reported the 1997 battle of wills, Peter Cobani is kneeling bottom right.

UNITED WE STAND – AND WIN

Twenty years ago this week a group of staunch TWU members accepted a package from Mayne Nickless after six weeks on the picket line.

Mayne’s does not exist anymore but the TWU is still here to represent and protect its members. Read the story below of this seminal victory – one from which current day members still reap the rewards.

Twenty years ago a fierce industrial dispute in Melbourne’s north played out to a national audience, it not only franked the might of the TWU but showed all Australian workers who their friends really are.

The dispute between drivers at Mayne Nickless’s IPEC Road depot in Campbellfield began when 120 employees refused to cross an ASU picket established by office staff on 28 November, 1997. Of those 120, Ipec sacked 40 owner drivers, prompting a 48-hour strike by almost 1000 Mayne Nickless truck drivers across Victoria.

The drivers were let go with nothing more than one week’s pay – the Australian public were appalled at the company’s behavior after it became known these drivers had accrued 960 years of service between them.

The TWU took the matter to the Federal Court and, after proceedings that lasted for five days, the company lost the case on the basis that they only sacked the owner drivers and not the company drivers who made up two thirds of the workforce. On Christmas Eve, 1997, the Court ordered the company to reinstate the drivers.

One of those drivers, Peter Cobani, had worked happily for Ipec Transport for two decades, said drivers had no income for six weeks while the situation played out.

“It all created a great financial strain at the time and it was devastating that the company would just let 960 years of service go so cold-heartedly, we were just so disappointed with them on a human level,” he said.

“We were told to cross the picket but we refused on the basis that it was unsafe as many of the protesters were drunk and throwing bottles and rocks at the trucks and that any driver who crossed the line would be retaliated against and driven from the industry.

“So we were locked out. A courier delivered a week wages to our homes and so all the drivers met with (then) TWU State Secretary Bill Noonan who said that no doubt we had been sacked unfairly.

“He then said ‘we will take Mayne Nickless to court, I don’t know which way it will go, but this is why you are in the TWU and we will defend you’. There was no doubt the boys got right behind the TWU at that point and what it was doing, we say them as a life-saver and a friend who wanted to help us out.”

The short story is that from late November to Christmas Eve, 1997, when Federal Court judge Donnell Ryan ordered Mayne Nickless to re-engage the drivers, the Campbellfield site was picketed by the TWU and the company was brought to a near-standstill. There were police with batons and clashes with scab drivers brought from interstate to keep the business going as best it could.

“IPEC didn’t want the owner drivers back and, in early January 1998 at the TWU Office in Port Melbourne we accepted a package after six weeks on the picket line. Mayne’s does not exist anymore. However, the TWU is still there to represent and protect its members and will be forever and a day,” Peter said.

“That in itself tells you all you need to know.” 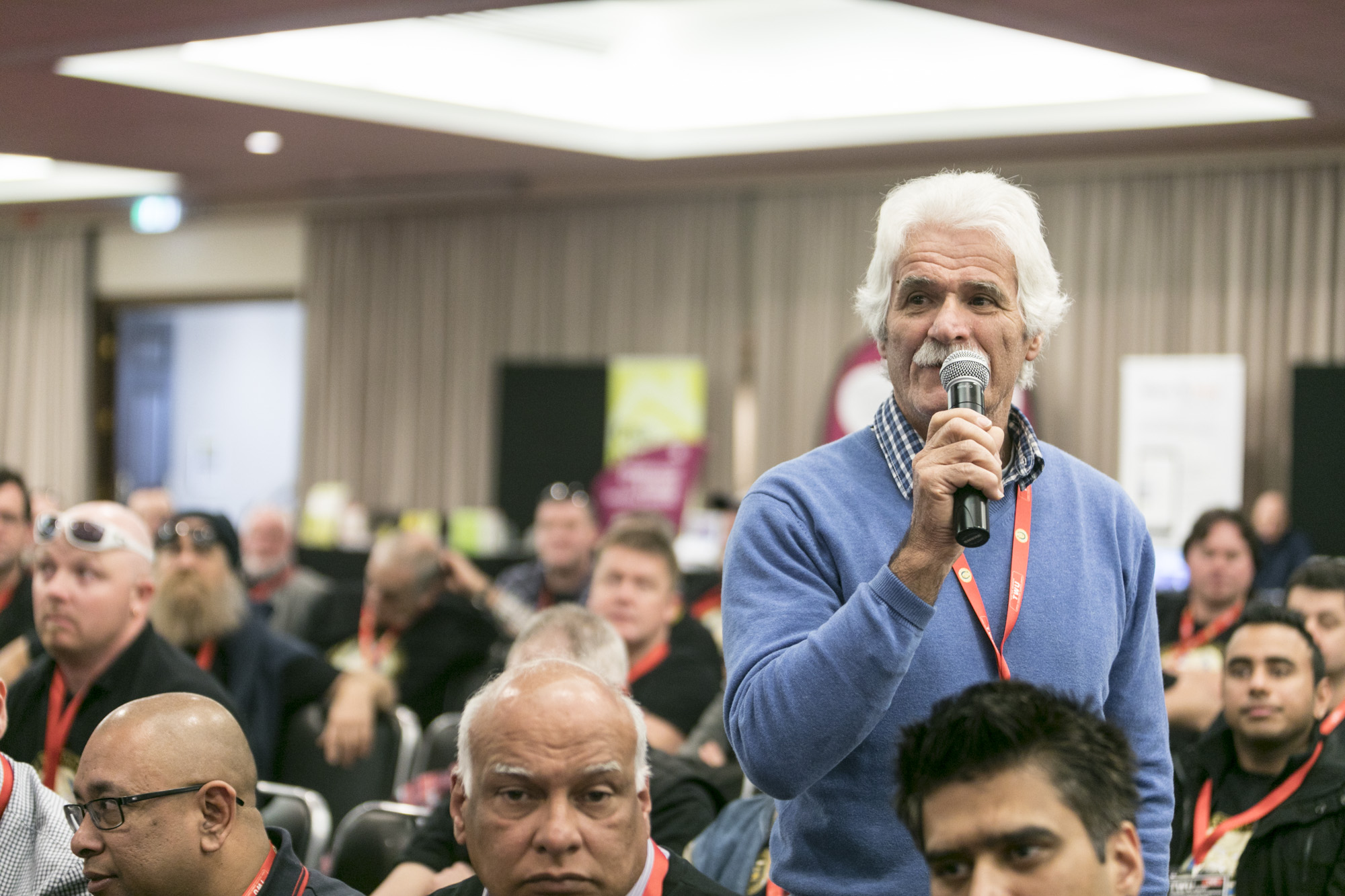 SOLDIER FOR THE WORKER: Peter Cobani today, he has always asked the tough questions of employers.