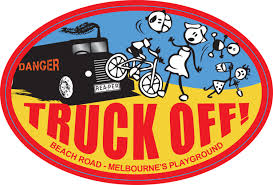 The TWU (Vic/Tas Branch) has taken an extremely dim view of unconstructive decals dispersed by an action group using inflammatory imagery and language in an attempt to paint truck drivers as irresponsible homicidal maniacs.

So incensed are they that truck drivers dare attempt to make a living along the strip, which already carries curfew conditions, they have letter-dropped 100,000 graphic “Truck Off!” stickers between Mordialloc and Port Melbourne. The campaign has also attracted some local media attention.

TWU (Vic/Tas) branch secretary Wayne Mader reminded protestors that the transport industry employed hundreds of thousands of Australians and was essential to the economy.

“This is about a residential group wanting to denigrate road users, particularly truck drivers, using key arterial roads at a time in history that Melbourne critically needs all roads available,” he said.

The BTAG website accuses “toll-dodging trucks” of placing “residents, children, pedestrians and cyclists at risk of injury or even death on a daily basis.”

“Next year a mega-port facility will open at Webb Dock and spew out more than two million trucks per year and many of these toll-dodging industrial trucks will transit through the Beach Road area,” the website further states.

“There is a solution. The Labor Government have the power to make the change in a single pen stroke. Our first line of defence against the monster Webb Dock is to call for a complete and immediate 24/7 ban on trucks.”

Interestingly, TWU News headed to Spring St and asked Minister for Roads and Road Safety Luke Donnellan where he stood on the matter.

“The Andrews Labor Government is not currently considering any changes to the existing curfew,” he said.

Well, glad we sorted that one out.