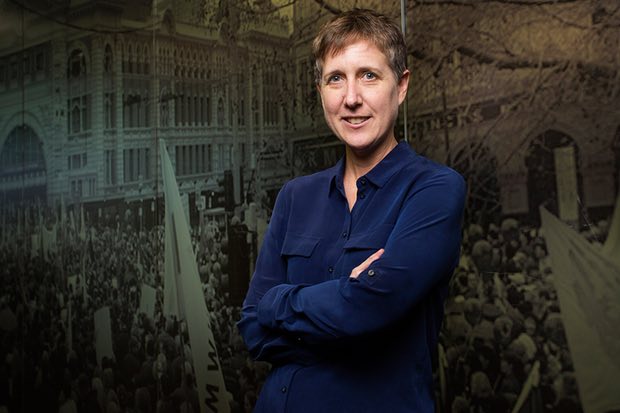 Remember when the Libs spent millions on a taxpayer-funded ad campaign for WorkChoices? They’re at it again.

Labor is not going to raid taxpayer funds to get the message out — but thought they had to raise the alarm and fight back.

This 1-minute video is custom-made for Facebook to reach young people who don’t yet realise their wages will be cut. Let’s all share it to raise the alarm:

Together we’re able to reach literally millions of people with this in the next few days. No taxpayer-funded ad campaign required. Let’s do it.

Share this video and stand with Labor to protect penalty rates.

The Australian Council of Trade Unions’ (ACTU) Executive has elected Sally McManus as the new Secretary.

Sally is the 10th elected ACTU Secretary in the organisation’s 90-year history and the first woman to hold the prestigious position. She fills the role vacated by former Secretary Dave Oliver, who left the ACTU in January. Sally was previously an ACTU vice president.

Sally’s first message to all Australian workers is “join a union.”

“I am extremely proud and excited about the future but there are significant challenges facing working Australians that must be counterattacked,” she said.

“We are living through a time when corporations and the very rich have become far too powerful and this has happened so quickly that our laws and rights that keep things in balance have not kept up. Australians are less secure in their work and rights for working people are just not strong enough. The penalty rates decision makes this fact unavoidable for our political leaders, and those who ignore that will do so to their detriment.”

“So my first challenge is to stop the attack on Australian workers through penalty rate cuts. Workers, in their unions, will fight until this unfair decision is reversed by the Government, no matter how long it takes, so that no worker can ever be worse off by a Fair Work Commission decision again.”

“I am committed to ensuring the living standards of working Australians are the best in the world and we are no longer beholden to the power of big corporations. The balance of power must be shifted so all Australian workers can share in the prosperity of this great country.”

“My mission in this role will be to fight for working people to have strong rights at work. We have strength in numbers and I am asking all Australians to join your union and build a better future.”

TWU (Vic/Tas Branch) Secretary John Berger congratulated Sally on her appointment and said that her experience, skills and understanding of workplace, social and political issues would hold her in good stead in fighting to protect and expand the rights of working Australians.

Third World Conditions Exposed at Australia’s Airports
TOLL MEMBERS – TOGETHER WE CAN WIN!