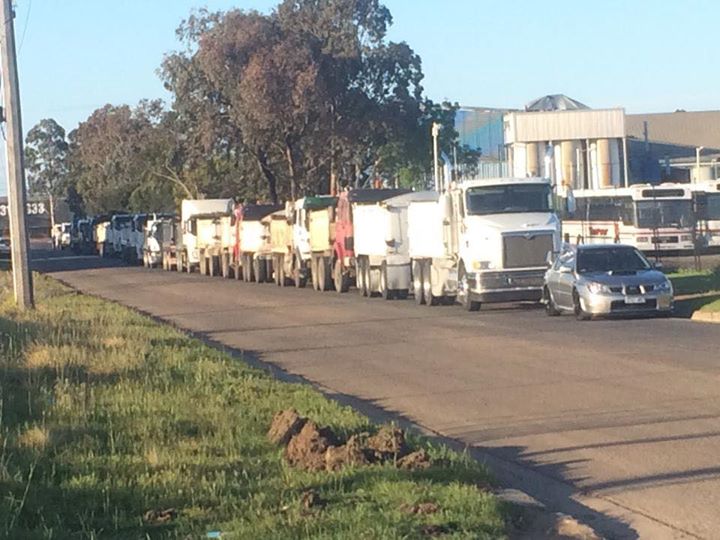 Yesterday (September 30) the Tipper Drivers’ Committee led a 24 hour work stoppage across Victoria to protest unsustainable low rates and sent a powerful message to hirers that tip truck drivers are united in the fight to negotiate fair minimum wages.

Rates for tippers have not improved in more than six years. Drivers’ are losing money while working, it’s unsustainable and it’s time to do something about it.

As part of an ongoing campaign the TWU has hosted several general meetings with Tippers and, in close consultation with the Drivers’ Committee, has determined acceptable minimum rates that are economically viable for tip truck drivers. These rates are intended to form the base of a minimum rates agreement between tippers and plant hires.

The minimum rates have been presented directly to most of the major plant hires. Whilst many of them agree that they are fair rates, and understand the issue, unless all commit to paying them as a minimum none will commit.

Tipper drivers have decided that it’s time to take matters into their own hands.

The Drivers’ Committee determined that there would be a 24 hour work stoppage yesterday (September 30) to send plant hires the message that tippers are united in the fight for fair and livable wages. Only by standing together as a group and refusing work at lower rates will the plant hires will have no choice but be forced to agree come to the table and negotiate to acceptable minimums.

Unity and solidarity are the essential ingredients to win. Together we are stronger and can make a positive difference to the rates in the industry. Talk to your fellow tip truck drivers and encourage them to join the union and support the fight for a minimum wage agreement. Spread the word about how we can win.