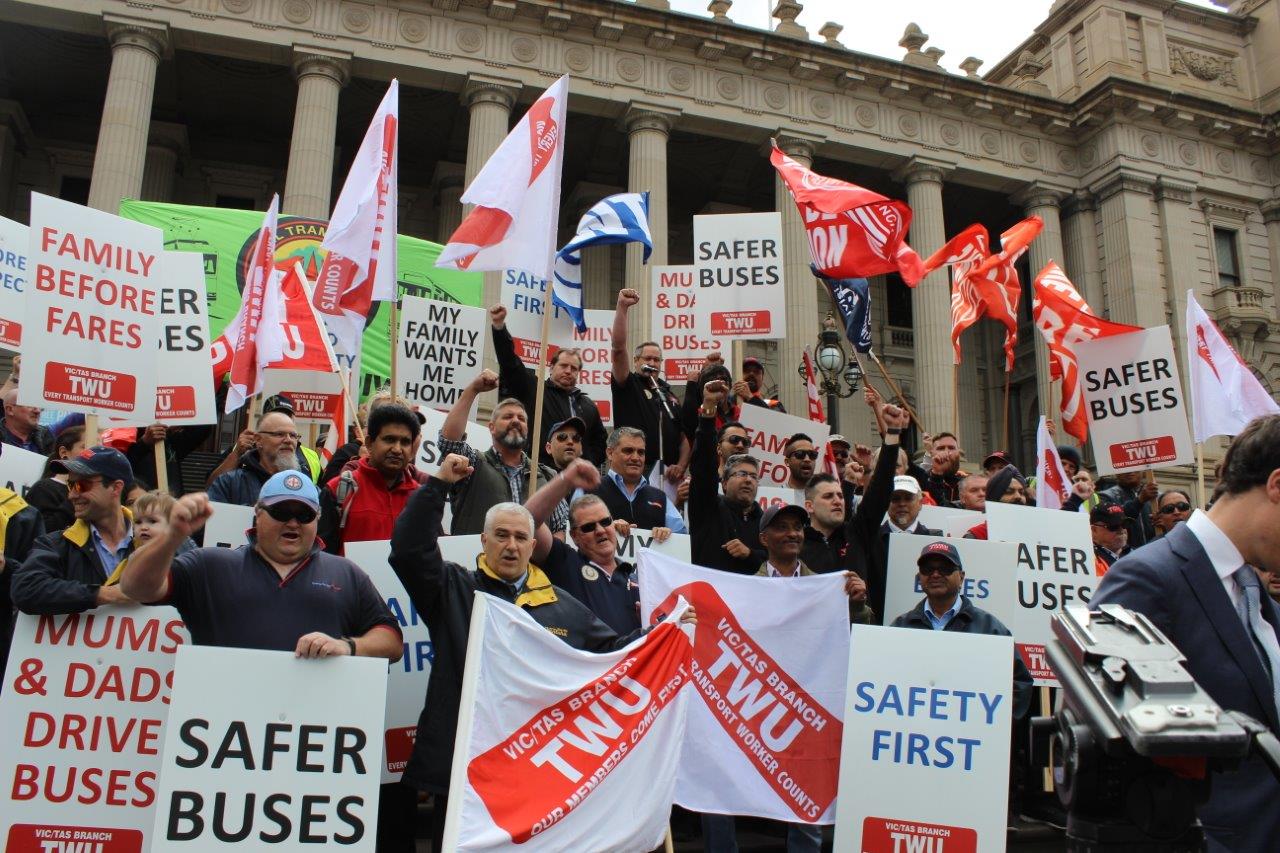 BUS DRIVER SAFETY PROTEST – STATE PARLIAMENT – Get on Board!

COWARDLY AND UNPROVOKED PHYSICAL ASSAULTS ON BUS DRIVERS MUST STOP

A large crowd of angry bus drivers protested their disgust at the escalation of violent attacks inflicted by aggressive passengers and assert their right to a safe workplace at a rally on the steps of the State Parliament of Victoria today. Photos from the event

Transport Workers Union (Victoria/Tasmania Branch) Secretary John Berger told those assembled that it was shameful that honest and hard-working bus drivers were forced to publicly protest for nothing more than the right to go to work and come home each day, safe and free from abuse and assault.

“The TWU have been saying ENOUGH is ENOUGH for some time,” John said.

“So now we have come to them. We unite here today in solidarity to ask the State Government to show some leadership and for Public Transport Victoria to provide a safe workplace for these drivers. We even have bus companies saying ENOUGH is ENOUGH.” Read John’s full speech.

Ticketing disputes, which have skyrocketed since the introduction of Myki by Public Transport Victoria (PTV) in May 2013, are the principal catalyst for assaults and threatening behaviour on bus drivers. Drivers want ticketing responsibilities removed and safety barriers installed. Victorian bus drivers are employed by private bus operators contracted to PTV and a contractual obligation with the state forces drivers to ask passengers to tap-on Myki.

John said there is no other profession in Australia today where a random punch to the back of the head is being shrugged off as an occupational hazard.

“The fact these buses are travelling at speed and often packed with schoolchildren, the elderly and other commuters does not worry these thugs who think nothing of using weapons against drivers, spitting in their faces, knocking them unconscious or holding knives to their throats,” John said.

“One driver being assaulted is too many, 16 so far this year is deplorable. The TWU has made good progress improving bus driver safety over recent years, but the escalating number and nature of assaults on our members is of great concern to us and enough is now enough.

“We are asking PTV to act now and introduce the highest industry standards of safety for those on the front-line of their operations. By not installing barriers, PTV are the barriers to safety.

“We are concerned for our member’s safety and the safety of commuters. And, make no mistake about it, this workplace safety issue is an emergency.

“We will not have our members or any members of the community go to work, or catch public transport, worried that they could be abused, spat on or attacked.”

The TWU is pushing for PTV to immediately:

Mr Berger said the TWU is also pushing for the introduction of mandatory penalties for those who attack drivers, additional Authorised Officers on the buses and the jurisdiction for Protective Service Officers be extended to the bus network.

The rally follows a National Day of Respect for Public Transport Workers prompted by the tragic killing of Brisbane City Council bus driver Manmeet Alisher. The 29-year-old went to work on 28 October but did not return home after an incendiary device was used to set him alight.

No bus services were impacted by the rally.