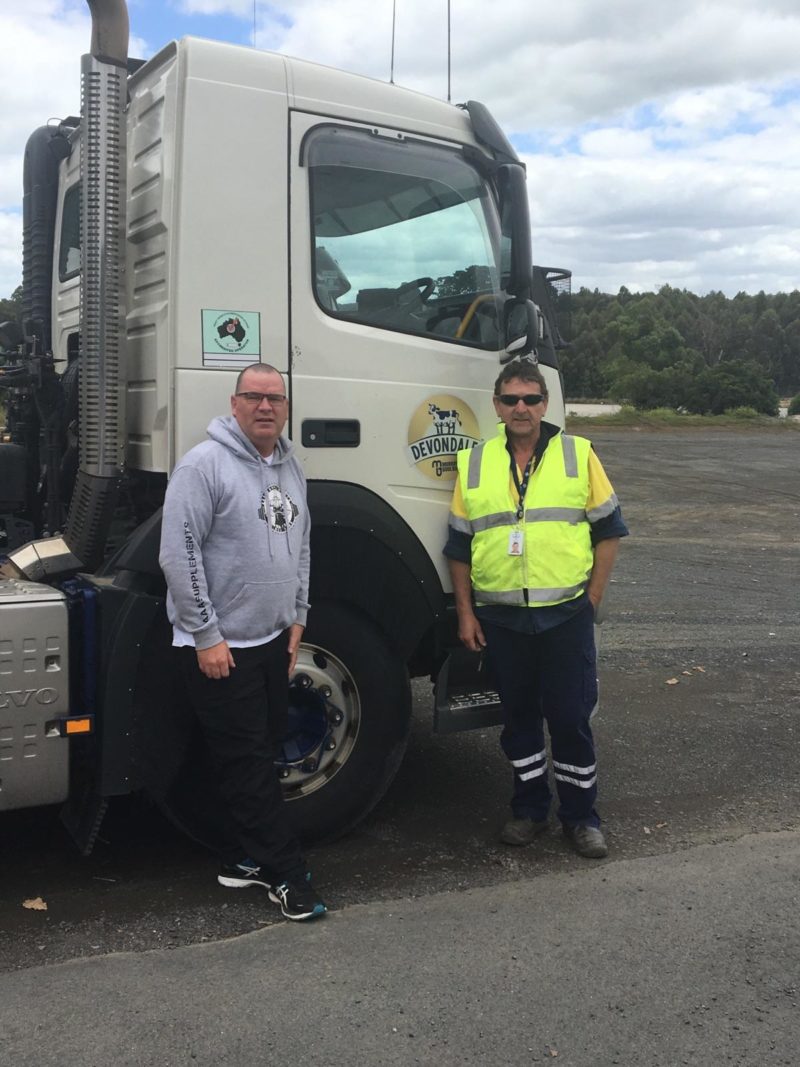 TRUCK driver Ian Ammon has been in constant pain since a crippling workplace accident over two years ago.

On May 11, 2014, the Leongatha-based Devondale Murray Goulburn employee, whose job involved driving a 30,000 litre tanker from dairy to dairy in the Gippsland to collect milk, was sent flying when a tanker hose reel jammed.

The now 44-year-old heard something in his back crack as he landed heavily on a vat room floor. Ian took 40 minutes to climb back into his rig but still cannot believe the response he received after reporting the accident to base.

“I was told ‘you’ll be right’ and to keep working,” Ian said. “When I got back to Leongatha I literally fell out of the truck.”

Incredibly, Ian said both he and other drivers had complained to management about the alleged faulty hose reel. He said, had the company acted on their concerns, Ian’s injuries could have and probably would have been avoided.

Ian was diagnosed with facet back pain and pain from the sacroiliac joint and was placed on modified duties and reduced hours, no longer able to work the nine to 12 hours a day, six days a week as his job requires. He has since undergone three nerve-blocking medical procedures and has been on a cocktail of prescribed medications and pain-killers since the accident.

But his world crumbled further on May 4 2015, when WorkSafe agent Gallagher Bassett terminated his weekly payments of compensation and entitlement to medical treatment expenses on the grounds that they had surveillance recordings that indicated he was no longer incapacitated for work or needed medical treatment.

Murray Goulburn then also cancelled his modified duties. He physically couldn’t get back in the truck and drive long hours and so has not worked since, delaying further medical procedures.

So bad is the pain that Ian has done the previously unthinkable and knocked back several offers of free tickets to Richmond Tigers games, being unable sit for longer than 15 minutes.

But the TWU (Vic/Tas Branch) never weaken ‘til the final siren’s gone, we were appalled at Ian’s treatment and the fighting fury of Maurice Blackburn accepted the case after referral. After a stressful year-long legal stoush, which included crucial involvement from Union Assist, Ian’s weekly payments and treatments were reinstated following a two-day hearing in the Magistrates’ Court in October this year.

“I’ve had no income since May 2015, apart from Centrelink payments I got for being totally impaired, and I went from earning $1740 a week to $440 fortnight. We had to tap into my superannuation to pay bills and I couldn’t pay rent for 10 months – luckily the landlord was so understanding,” Ian said.

While both parties tendered the expected documents and medical reports to Magistrate Simon Garnett, defendant Murray Goulburn Co-Op Co Ltd also introduced surveillance recordings they hoped would prove Ian was milking the extent of his symptoms, and his level of disability.

But Mr Garnett placed little weight on the recordings considering only 25 minutes of what was reported to be 38 hours of surveillance film was presented to the court.

“It is just ridiculous they sent us as a family to hell and back when they had so little evidence, and it has delayed treatment and set back my recovery,” Ian said.

“You never want to have an accident, they are just ruthless. They don’t care about people.

“I would be buggered without (TWU senior organiser) Mick Wirrick, Maurice Blackburn and Union Assist. We were made to fight for everything and without them in my corner I would not have lasted the distance.”

Thierry Auffray, a Senior Law Clerk at Maurice Blackburn, said the firm represented many clients like Ian who were injured at work through no fault of their own.

“Fighting for the rights of injured workers is a large portion of what we do at Maurice Blackburn so we’re pleased that we were able to help Ian get what he was lawfully entitled to,” he said.

Ian currently struggles to sit or stand for over 15 minutes, walk 100m, carry more than 5kgs and cannot handle stairs or kneel and squat.

“I just want to work. My GP said I am on too much pain medication,” Ian said. Ian is still waiting to have a programmable stimulator inserted beneath the skin and muscle which delivers a low amplitude electrical stimulation. The operation will allow Ian to return to alternative, lighter duties, but he will never again be able to drive a truck.

“You never want to have an accident, they are just ruthless. They don’t care about people. I would be buggered without (TWU senior organiser) Mick Wirrick, Maurice Blackburn and Union Assist.” We fight and fight and win