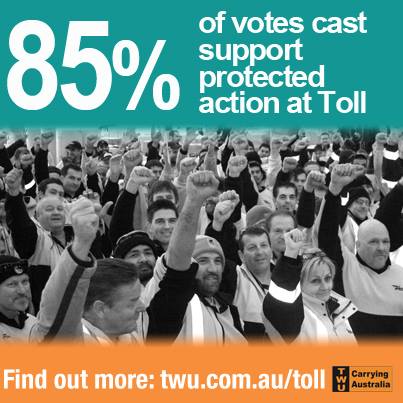 Workers at transport giant Toll have voted convincingly in support of protected industrial action, sending a powerful message to the company that they are willing to fight for a fair
agreement that guarantees their job security, workplace safety, fair superannuation, as well as protecting against the threat of outsourcing.

The result announced by the Australian Electoral Commission, means that workers at Toll will be in a position to take protected industrial action, up to and including 72-hour work
stoppages.

Transport Workers’ Union (TWU) National Secretary Tony Sheldon said that 85% of votes cast supported taking protected action, sending a clear signal that Toll workers are willing to stand up for their rights at work and will not agree to a second rate deal that threatens their ability to provide for themselves and their families in years to come.

“Since April, TWU members have been in there negotiating with management for an agreement that recognises that it’s the blood, sweat and tears of the workers that make Toll the Aussie success story it is.

“It’s always been our intention to reach an agreement with the company that our members can vote on, but after more than 100 hours of negotiations we still remain some distance apart.

“Just last week the company announced a record profit of $282 million for the last financial year. The company’s shareholder dividend has grown year after year. TWU members are seeking a fair agreement that recognises their role in the continued success of Toll and ensures that their job security, conditions and safety standards won’t be undermined.”

Truck driver Steve Newton from Sydney, is part of the member-led negotiation team trying to achieve a fair agreement.

“We voted for protected action because we want management to know that if it comes to it, we’re willing to do what it takes to make sure that our jobs, conditions and safety standards cannot be outsourced”, said Steve.

Mr Sheldon continued, “Following on from this decision, our member led-negotiation team will now meet to decide on the appropriate scope and size of industrial action in the event
Transport Workers’ Union that the deadlock is not broken.

“Negotiations continue and I hope that we can avoid industrial action. But with management refusing to listen to what’s important to their workers, TWU members are more determined
that ever to stand up for their rights.”