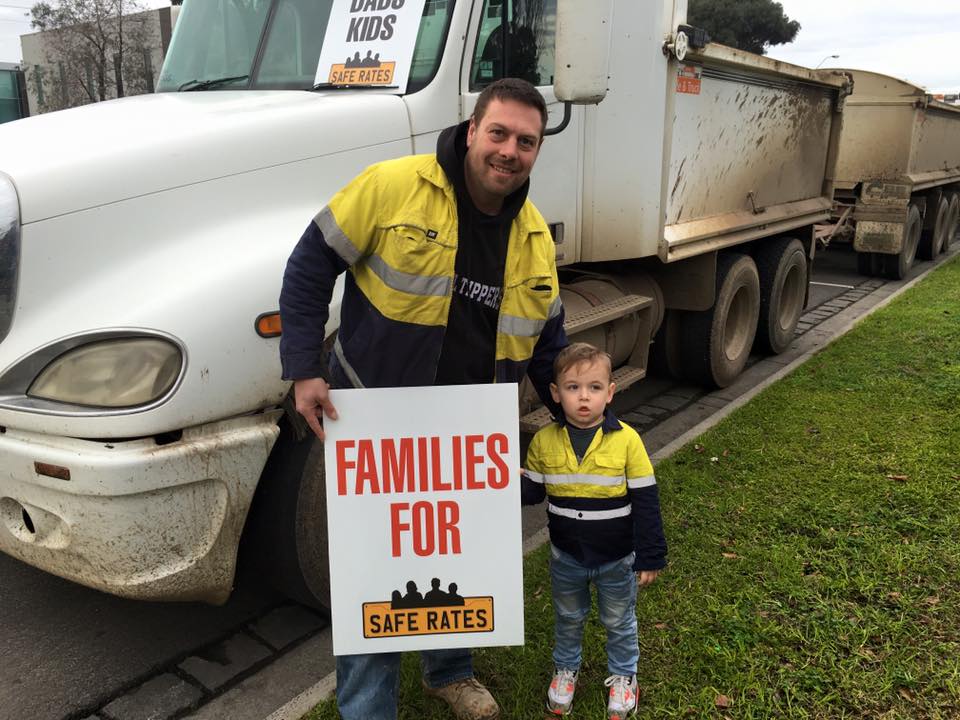 TWU owner-drivers have received some good news with the establishment of a wide-ranging State Government review of laws regulating owner drivers and forestry contractors.
The TWU (Vic/Tas Branch) has long-campaigned to ensure these members, particularly those in the tip-truck industry, can operate in fairer and safer workplaces.
Branch Secretary John Berger has congratulated the Andrews Labor Government on establishing the review, which aims to update the Owner Driver and Forestry Contractors Act 2005 and Owner Drivers and Forestry Contractors Regulations 2006 (Vic) (ODFC Act).
Importantly, the review will consider whether a comprehensive, industry-based, rates and costs schedule or code should be developed. It will also review the threshold requirements upon hirers to provide the applicable rates and costs schedules to owner drivers to ensure that the requirement is triggered based on the usual hiring practices across the industry.

At the urging of the TWU, the introduction of industry-wide compliance and enforcement arrangements will also be examined.”

John said the Branch had undertaken a long and sustained campaign for the removal of unnecessary economic demands and pressures through the entire owner-driver industry, such as uncertainty regarding rates of pay, working hours and what are worsening occupational health and safety issues.
These pressures often result in the exploitation of hard-working members by unscrupulous operators and hirers and force some drivers into unsafe practices.
The situation has been further exacerbated by the Turnbull Government’s decision to dump the Road Safety Remuneration Tribunal, leaving drivers without the protection they need.
Some review objectives had been suggested by the TWU to the recently-concluded Victorian Inquiry into the Labour Hire Industry and Insecure Work  and were ultimately incorporated into the Inquiry’s report recommendations to the State Government – which was used as the basis for the review’s terms of reference.

“We have been campaigning for a very long time to help tippers, who are basically treated like second-class citizens. These members are experiencing difficulties in maintaining vehicles and meeting operating costs,” John said.
“As a consequence some are having to make a call between allocating funds to maintaining trucks properly or feeding and clothing their children, and as a result of this brutal choice we have unsafe tippers on the roads.
“Pressure is also being placed on drivers to work extra hours or attend sites early and queue to secure a minimum number of loads to just meet costs.”

Other inquiry recommendations include a code of practice be developed for the industry, examine contracting requirements and dispute resolution mechanisms available to owner drivers and to address any avoidance of rights and responsibilities under the ODFC Act and Regulations.
John said the findings of the review would be crucial in cutting the dangerous levels of cut-throat competition in the excavation industry putting drivers and the public at risk.

“I feel a great relief, not only for our members but for all road users, that the authorities are finally beginning to understand what we have been saying across all these years during our campaign for better conditions for our tipper members.”

The review will also investigate recent changes in the Victorian transport and forestry industries, national legislative and regulatory developments, the regulatory burden of the ODFC Act and membership and functions of the Forestry Industry Council and Transport Industry Council.
For further information, visit www.economicdeveloment.vic.gov/odfc-review

The review announcement follows in the same week the Branch held a major protest on the steps of Victoria’s State Parliament to demand safer working conditions for bus drivers.